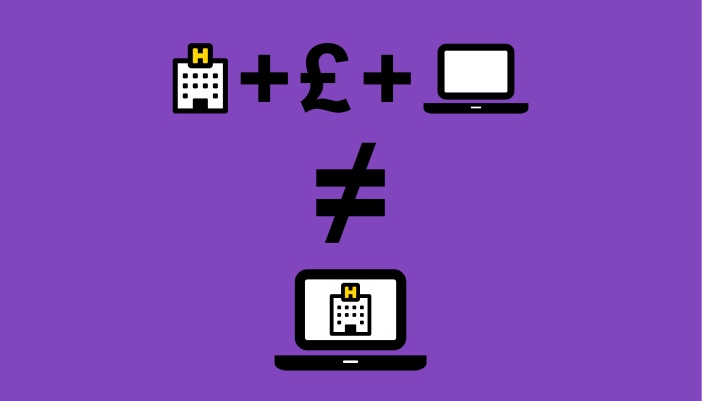 The UK Health Secretary, Jeremy Hunt, has announced that the NHS will be getting over £4Billion to improve IT with the hopes that clinical staff will gain valuable time to spend with patients instead of with paperwork.

This sounds really positive doesn’t it?

Technically, it is, since certainly it will cost a lot of money to buy new hardware and software. But it will also cost a lot of time and effort, and this is where I have serious doubts that this money will do anywhere near enough to improve IT in the NHS.

I still remember when the then Labour Government led by Tony Blair started the National Program for IT (NPfIT) back in 2002. What was meant to be a £6 billion investment is now costing an estimated £20 billion in ongoing development and deployment costs despite the Conservative-Liberal Democrat government ending it in 2011. It has been one of the greatest financial failures the UK has ever suffered.

Some products from the program were rather successful, such as NHSmail, an only email service for all NHS staff, and the N3 network which is the NHSs own high speed internet connection. However, hundreds of hospitals where to use a new Electronic Patient Record system, Lorenzo, developed by Cerner which in the end went to only a couple of dozen.

To put things in to perspective, this means that on average the annual cost of running approximately major teaching hospitals was has been gobbled up each year for a decade.

Design decisions were heavily influenced by people who weren’t going to use the systems and solutions being proposed. The decision had more political motivations than practical ones to improve healthcare. Instead of IT solutions being tools for staff, they were to be tools for central Government to control how clinical services are given.

With such a poor understanding of what the end users, including but not limited to doctors, nurses and all other health care professional involved in patient care, I was impossible to satisfy all the needs. It is true that you can’t keep everyone happy all of the time. But in the very least, any digital products being made must be used by all. It’s not like you get a few people saying Microsoft Word is impossible to use. Some may grumble about new iterations, but they all use it. This was not the case with products such as Lorenzo. If a system is not functional, it will not be used. Simple.

It has been a terrible mess trying to get hospitals to adopt all of the solutions. For example, The Royal Free Hospital was given Cerner’s Millennium back in June 2008 for free. Despite this, due to a number of issues such as lost outpatient appointments, delays in treatment, cost of extra staff and extra software needed, the roll out has cost well over £7 million.

An increasing number of doctors, and many other healthcare professionals for that matter, are thinking of leaving the NHS, if not their profession all together. Perhaps some of that money should be spent on trying to retain the highly trained staff that treat the sick before we get more machines and digital products which are meant to be tools for these highly trained staff to use. Grand innovations in digital health will reduce the need of staff, and in turn can reduce costs, but these innovations will never replace staff completely, and the cost benefits will take years, if not decades, to be realised.

We need to take a step back and fully appreciate what is going on rather than just look at problems. When we really know what we are doing now at a granular level and look at what we have as resources, we can then design new and improved ways of working where digital and technological innovations will be one of many answers.

In one of my previous articles, I highlight the benefits of having more doctors do healthcare UX.  Beyond that, we need design thinking and user centred design to be integral to the planning and implantation of ideas to improve healthcare by all members of staff, not just the most senior one’s who have final say.

Feel free to get in touch if you want to hear more about improving digital health.

Leave a reply. Go on, you know you want to! Cancel reply

How I became a Clinical User Experience Designer

UPDATED: I first wrote this article on January 19th 2016. Over 3 years later, life has changed as a designer, so I thought I would update this post to thank all the people who have helped me along with my career, including, but not limited to Dr Ritch Macefield,...
Read More

Digital health & tech is big business. In 2017, the global digital health and tech market is valued at $135.9 billion USD1, of which $24 billion USD is for the mobile health market alone1. Secretary of Health, Jeremy Hunt announced in early 2016 that £4.2 billion...
Read More

Linkedin is one of the most powerful tools for professional development that is rarely used by doctors. By having a profile on Linkedin, you strengthen your online presence, and grow your personal and professional networks.   Here’s some tips for how to maximise...
Read More

You have successfully subscribed.

This website uses cookies to improve your experience while you navigate through the website. Out of these, the cookies that are categorized as necessary are stored on your browser as they are essential for the working of basic functionalities of the website. We also use third-party cookies that help us analyze and understand how you use this website. These cookies will be stored in your browser only with your consent. You also have the option to opt-out of these cookies. But opting out of some of these cookies may affect your browsing experience.
Necessary Always Enabled

Any cookies that may not be particularly necessary for the website to function and is used specifically to collect user personal data via analytics, ads, other embedded contents are termed as non-necessary cookies. It is mandatory to procure user consent prior to running these cookies on your website.